Did you know that all those beautiful, perfect white sand beaches are actually created by fish? Or, to put it more mundanely – parrotfish pooh! Any doubt as to the truth in that remark?

Well next time you swim, snorkel or scuba dive in a perfect tropical ocean, just take a look at those amazingly huge teeth on the aptly named parrotfish. 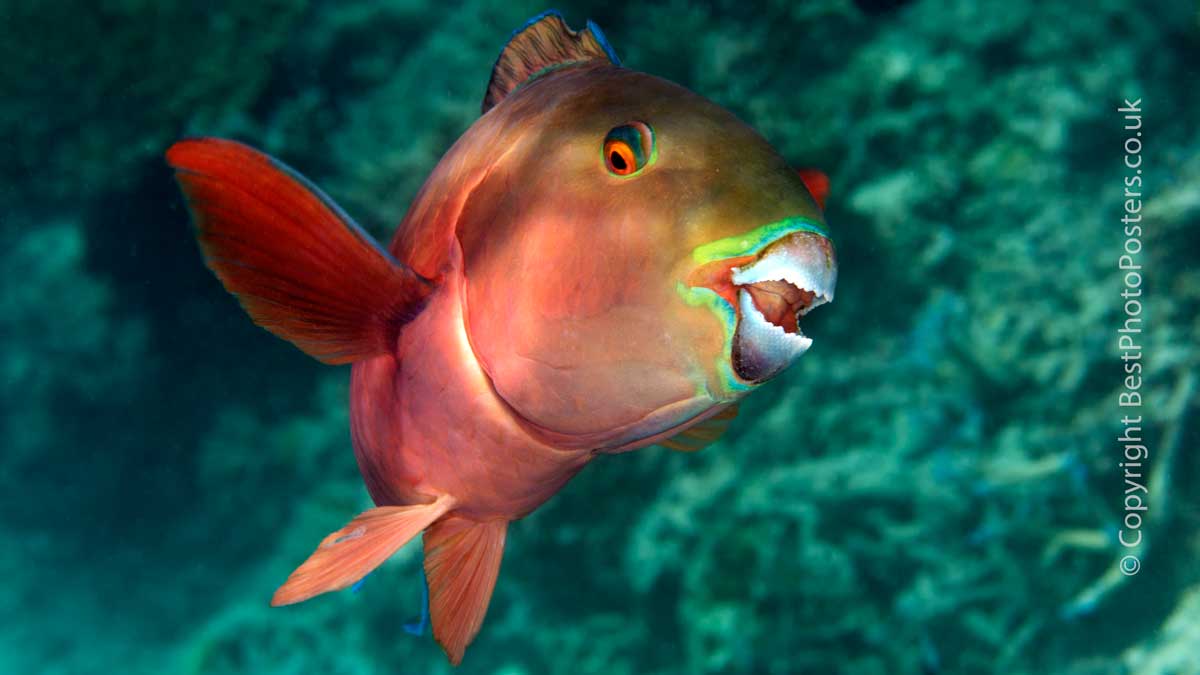 The clue is in the name, they have incredible beak-line protruding teeth which appear terrifyingly ominous but actually are used for munching on corals.They utilise their amazing teeth to rasp on dead corals and other rock formations within coral reefs.

On most other animals, this would wear down their teeth leaving them unable to feed, however this is not the case for our intrepid beach creators. Parrotfish teeth grow continuously in a tightly packed mosaic pattern giving them the ability to feed on hard rocks and corals unimpeded. 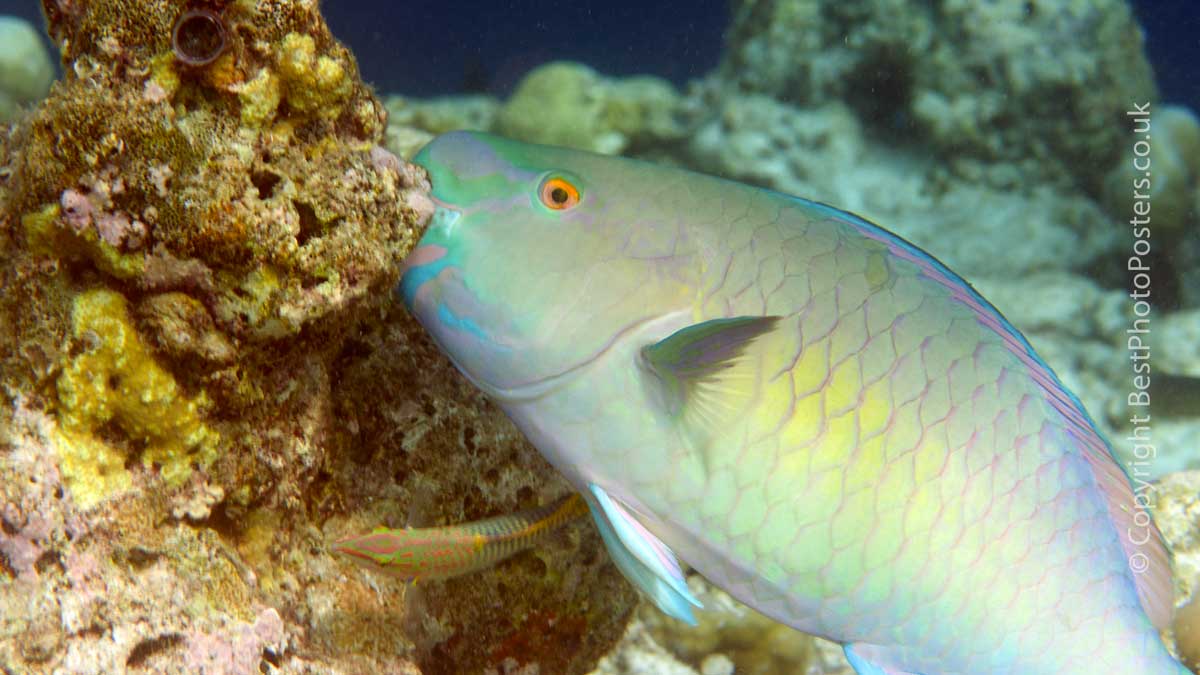 2. Symbiosis with the reef eco-system

Their relationship of Parrotfish with the reef is partially symbiotic. It sometimes appears worrying when the reef disappears in front of your eyes as their large aggressive teeth rasp destructively upon beautifully artistic coral formations within a reef.

Indeed much of the diet of a Parrotfish may appear to cause devastation to the worlds reefs. However, appearances can be deceiving as this is not entirely the full situation. Nature has evolved to develop an intricate web of facets to the relationship, both above and below the sea. 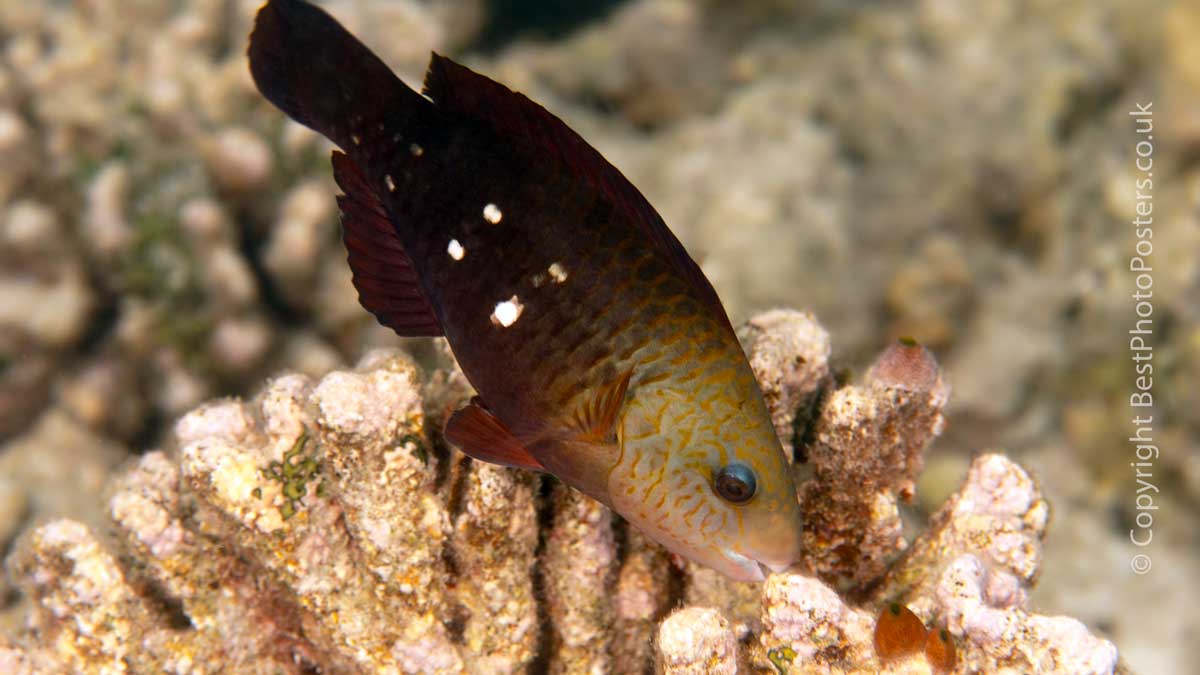 The rampant feeding of a Parrotfish on coral reefs actually prevents algae, sponge and seaweed overgrowth within the reef biome (biomes are a distinct biological community of plants and animals), thus helping to preserve the corals.

Even more importantly, everything they consume that is not edible is excreted in the form of tiny grains of sand. These tiny grains over the centuries have formed those amazing tropical islands we all dream of with their beautiful palm trees and perfect white sandy tropical beaches.

Candelamoa Parrotfish displaying its teeth, waiting for the removal of parasites at a reef cleaning station. 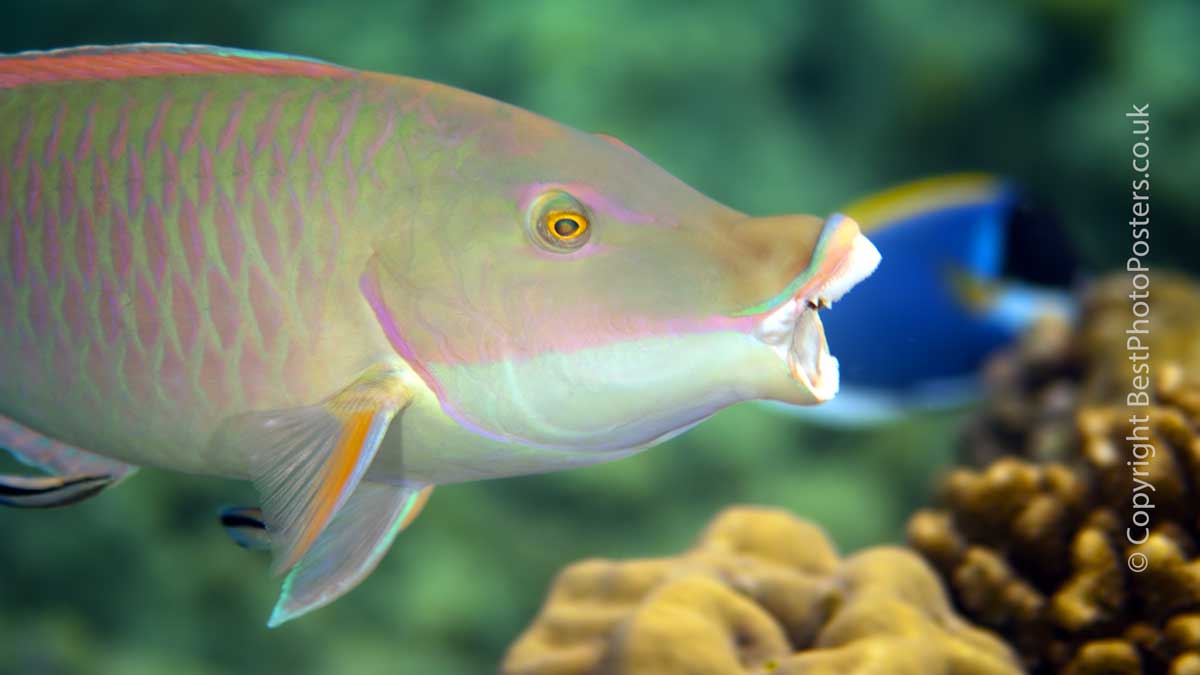 Parrotfish have several remarkable characteristics, apart from their dominating feature of their teeth. One of the most fascinating aspects is their appearance as they metamorphosis from one colouring to another throughout their lifespan (known as polychromatism).

This makes them extremely difficult to identify as occasionally the same species has been identified several times as it progresses through each phase of its lifespan. Most species tend to be dull reds, greys or browns when in the initial phase.

Spotted Parrotfish in its initial phase

(female with golden and brown colours) 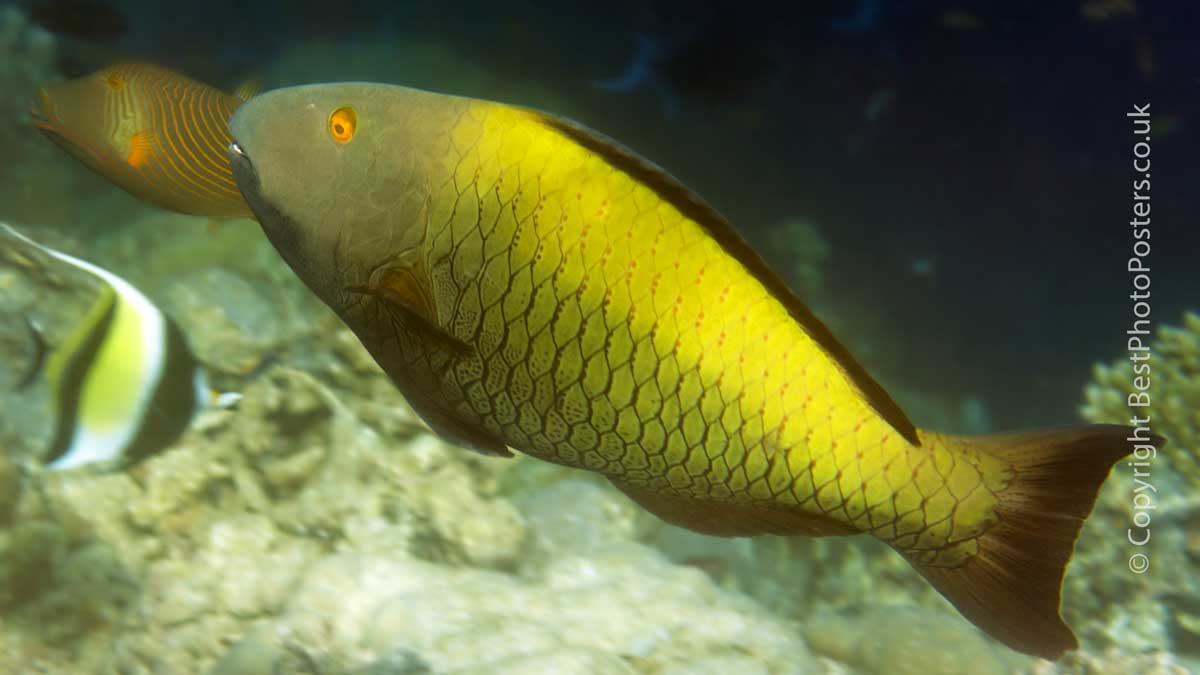 (it has metamorphosed both in sex (now male) and in colour)

When Parrotfish enter their terminal phase, they change to the more striking colours that most of us recognize; vivid patterns of pinks and yellows on vibrant blue and green backgrounds. 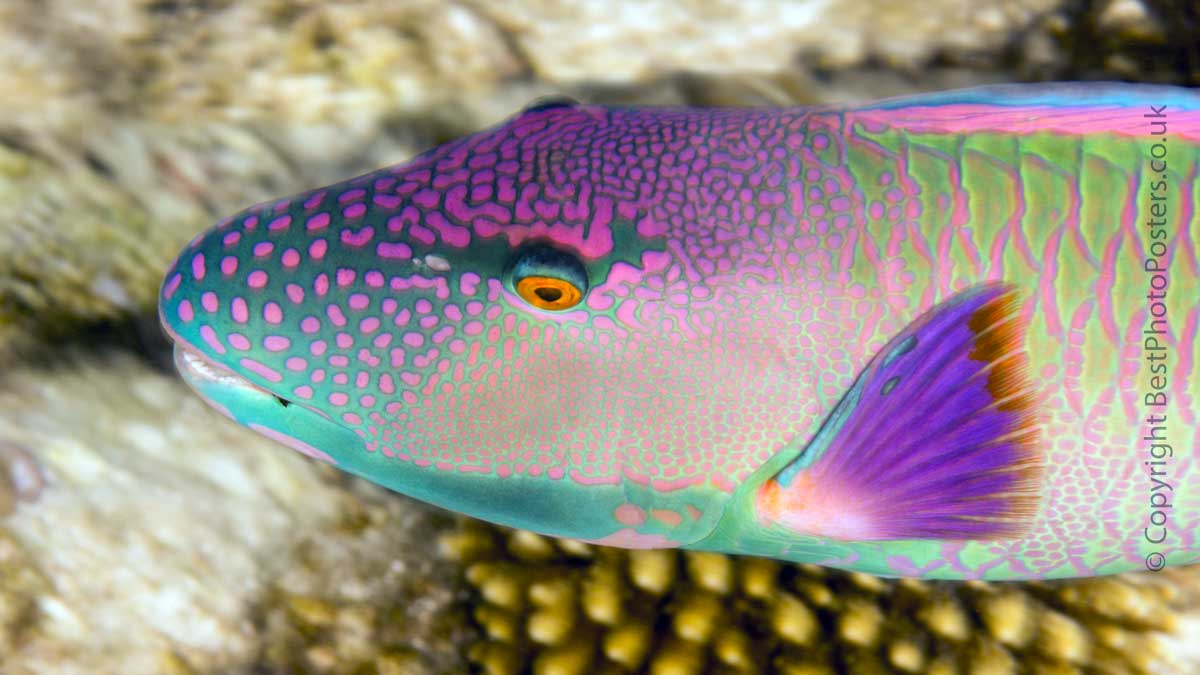 Another amazing metamorphosis by Parrotfish - gender variation as they progress through their lifespan. It’s a minefield attempting to understand how many individual species transform from female to male (or not). The majority of Parrotfish are sequential hermaphrodities, they change sex during the course of their lifespan. Most start as females (known as the initial phase) and then change into males (known as the terminal phase).

Each phase is accompanied by a remarkable colour transformation, although like much wildlife; this means that females are retain dull less interesting colours whilst the male phase is highlighted by astoundingly beautiful patterns and bright colouring. Parrotfish shine out from the already colourful reefs, not just because of their enormous teeth but because of their radiant colouring which appears iridescent as the sun penetrates through the water from above.

The remarkable striking colours of a Singapore Parrotfish 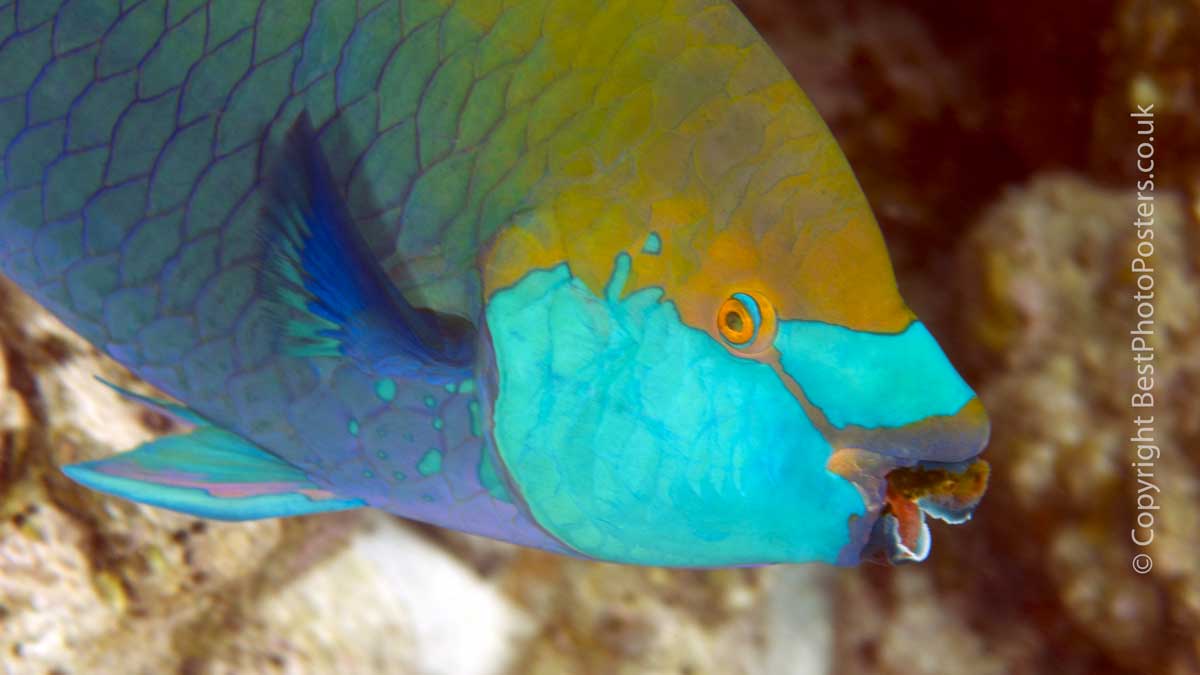 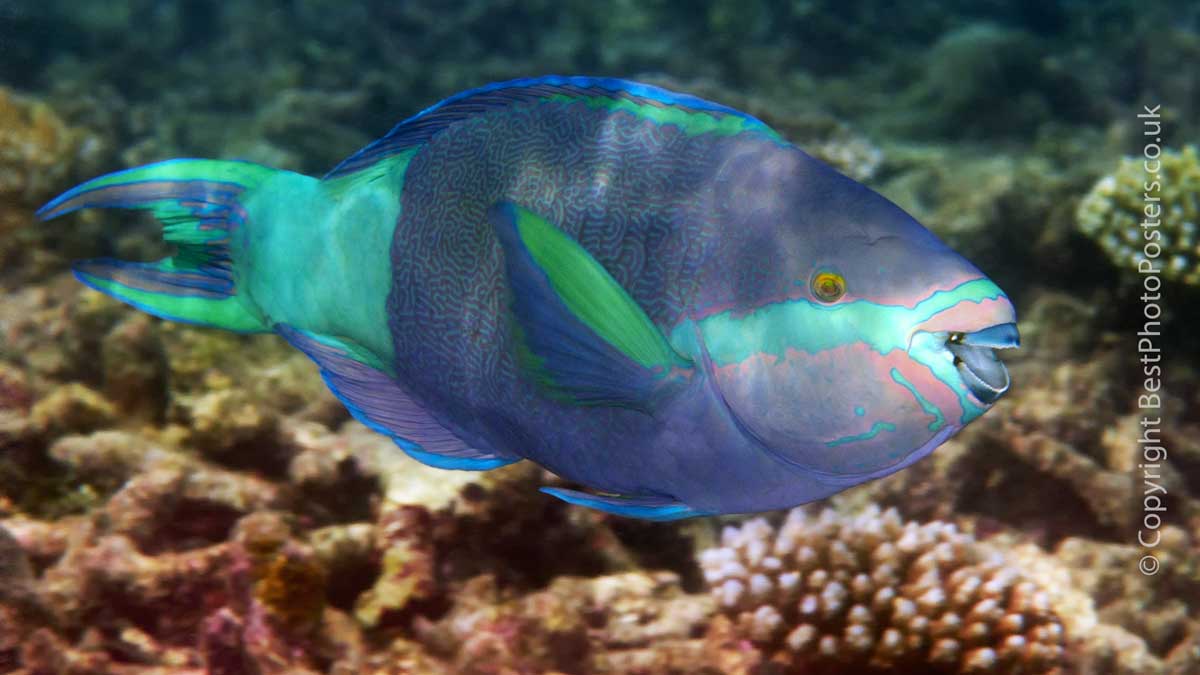 4. Night-time on the coral reef

Its colouring perfectly blending in with the delicate pink and greens patterns of reef life sharing the haven of the corals. Ever fancied a night dive or snorkelling in the sunset? Well keep an eye out for sleeping Parrotfish. Curling up within the nooks and crannies of the reef, Parrotfish can be spied dotted throughout the night-time reef hiding from their predators whilst catching forty winks.

Some species additional excrete a mucus whilst they sleep. The mucus envelopes the fish whilst it sleeps and performs a two-fold function. Firstly, it disguises their scent from potential predators and secondly, it may provide an early warning system. Any potential predator endangering the parrotfish would need ro pierce the mucous membrane, giving just enough time to escape.

Viridescent Parrotfish sleeping in the corals 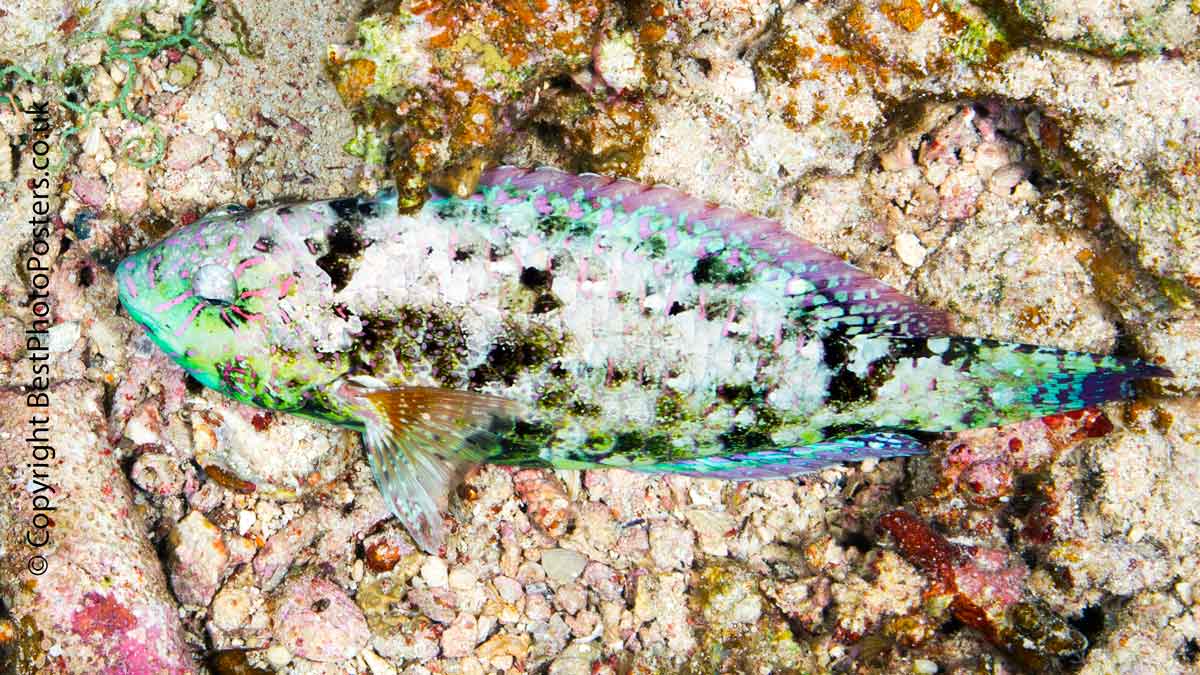 (whilst Cleaner Wrasse feed on and remove parasites)

So next time you lay on a sunbed wriggling your toes in the delicate white sands of a stunning Maldives island, keep a watch out for groups of parrotfish nibbling along the coral reef – remember the tropical beach you a lying on was quite likely created by parrotfish! 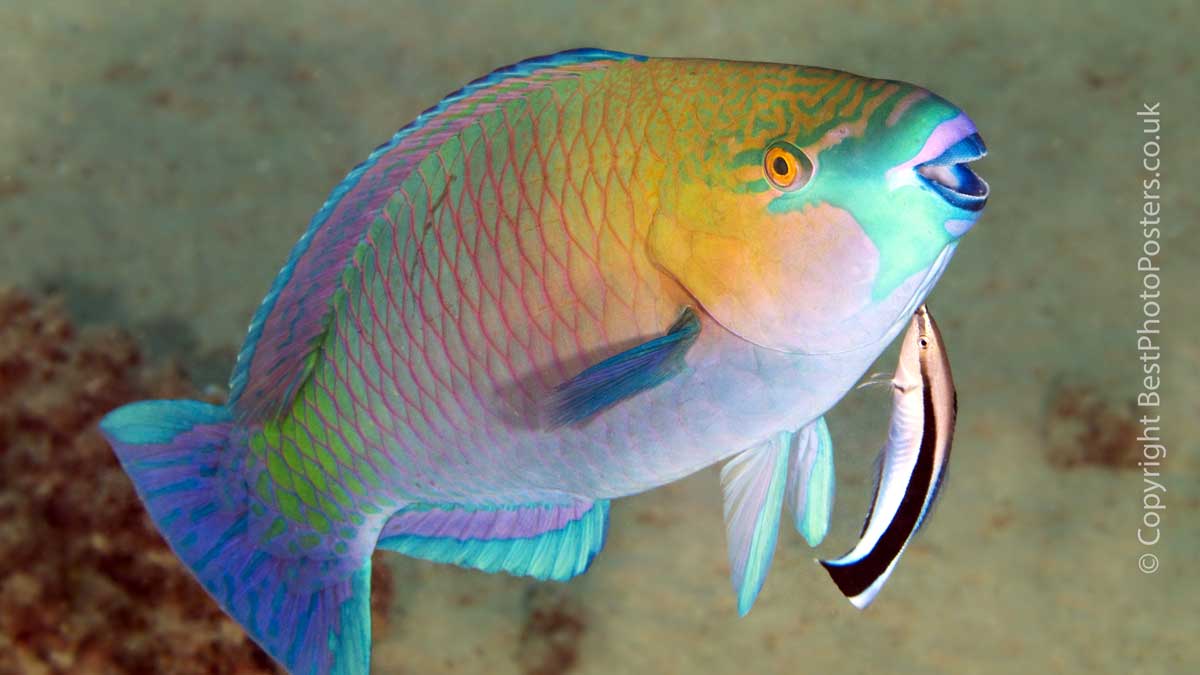 © All images in this article are copyright Anim8design Ltd.
Let us know you agree to cookies
Best Photo Posters uses cookies to process orders for photo posters, canvas prints and picture framing and to give you the best online experience. Please let us know if you agree to all of these cookies.
Accept Close More information
Cookie Settings